The fauna of Southeast Rügen is less well-known than the flora. A handful of monographs, mainly about insects, have reported IUCN Red List species in the biosphere reserve. Dry grasslands are important habitats for thermophile species such as Anthophora plumipes, Lasioglossum calceatum,Coelioxys quadridentata, Hedychrum nobile andVespa crabro.

Reed beds are particularly valuable habitats for nesting water birds. Whereas Southeast Rügen is an important stopover site for some migratory birds, other migrants remain here all summer to breed. During migration, thousands of geese can be seen at rest in the bays around the Isle of Vilm and feeding on nearby agricultural fields. Geese in the genus Anser, such as the Greater White-fronted Goose (Anser albifrons), the Bean Goose (Anser fabalis), and the Lesser White-fronted Goose (Anser erythropus) are particularly common.

Aquatic communities dominated by seagrass, red algae and green algae are also of great ecological significance for the region. Every spring swarms of herring from throughout the Baltic Sea and parts of the North Sea swim to the Greifswalder Bodden to spawn. Due to their large numbers, herring are an important income source for local fishermen. 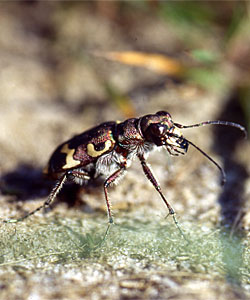